The weekend before Valentine’s Day, my friend Pippa and I were sitting at our kitchen table trying to decide how to celebrate. We wanted a way to show all of our friends how much we love and appreciate them! Complicating the Valentine’s a bit is the fact that we have friends in multiple countries, so delivering something in person would be impossible and sending something through the mail would add up quickly. Fairly quickly we decided to send something via email. We put out a post on Facebook asking people to respond if they wanted a valentine from us. With those responses plus people we added, we had 34 people on the list! 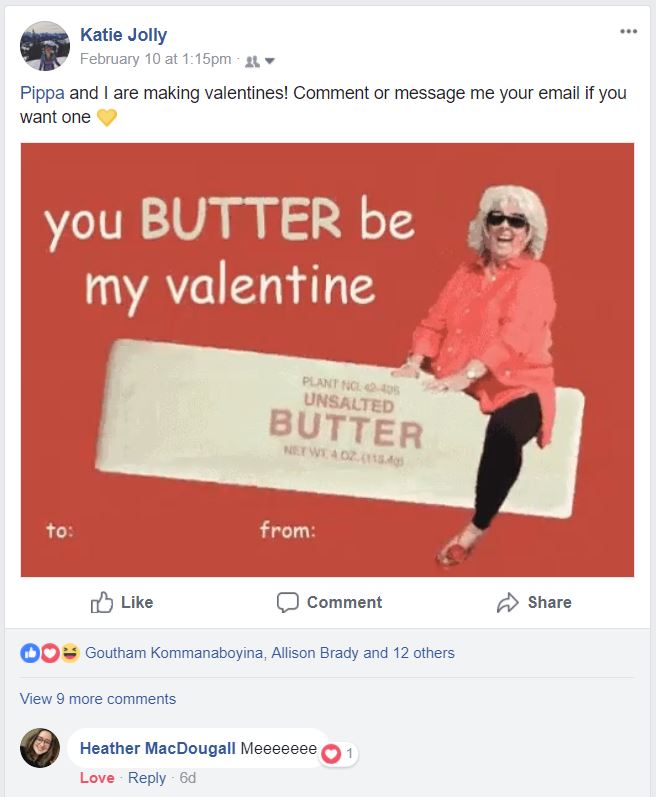 We were talking about the poem generator I’d built a few weeks ago and thought somewhere similar to that would be a good place to start. I’d read Sarah Lotspeich and Lucy D’Agostino McGowan’s secret sampling post about sending emails through R will ponyexpress. They’d used it to send messages about secret santa over the holidays, but it seemed like we could use that idea for sending valentines! The final idea was to randomly generate a conversation heart for each of our friends with markov chains and then send them via email with ponyexpress. This would also give me a chance to use the markovifyR package that I’d heard such good things about!

For the rest of the afternoon (we’re quite skilled at procrastination), powered by Whitney Houston and Mary Chapin Carpenter, we entered nearly 500 possible conversation heart sayings into a google sheet so we could both be working at the same time without too many duplicates. Some were much better than others; our creativity really started to fade around the 300 mark. The 300 to 500 range included gems such as “discount candy” and “wuts ur sign” (there are some astrology fans in my house, I unfortunately am not one of them).

To start, we needed to read in the sheets from google with googlesheets package. Then we cleaned it, due to some predictable errors that go along with human-entered data.

Next I needed to create a model that generate the text! Luckily the markovifyR package has pretty good documentation and I could look to Malcolm Barrett’s Stochastic Shakespeare: Sonnets Produced by Markov Chains in R post for some guidance as well.

The only other step for the text was to actually generate the messages. It was difficult because each input saying was so short that there weren’t a whole lot of probabilities to work from. It was a challenge to create enough distinct messages, but we made a workaround for that.

These are the sayings it built! Evidently some of our text cleaning didn’t quite work but honestly that’s okay with me for this type of project. None of my friends know enough R to call me out on it, I think :D And I didn’t want to spend too much time doing all of the cleaning.

We decided to sample enough messages from this list for each of the people on our email list.

While Pippa finished up the brainstorming, I started to work on the image processing part. From blog posts I’d read, (in particular Maelle’s about creating Galentine’s Day cards) magick has always seemed like a cool package, but until now I hadn’t done much that required it. We decided to superimpose the generated text onto a heart to create the final image to send. We’d include it in the email with a bit of text for context!

Warning, the part ahead is definitely the least elegant! I use the dreaded for loop because I learned Python first and admittedly haven’t ever really taken the time to get comfortable for map or lapply. Some day I will…

I wrote a loop to create an image for each person and then saved that image as {name}.png

While playing around with the ponyexpress package, I figured it would be easier to include the images if they were stored online and GitHub seemed like the natural option. So I wrote another similar loop to create GitHub paths for the images.

At this point we were done with all of the prep work! The next task was formatting the emails and then sending them!

As a note, I used two separate R scripts for these two halves of the work. It helped me think in two separate sections.

We wrote the skeleton of the email and saved it as body. We used the GitHub paths to include the images! We also included a gif at the end just for extra fun.

I then added my name and email as a blank row in the table so that ponyexpress would recognize my account.

And it was an easy decision to use the glitter template!

Then we just put the pieces together in the parcel_create() function!

To see our great creation we ran parcel_preview()

It produced this card! 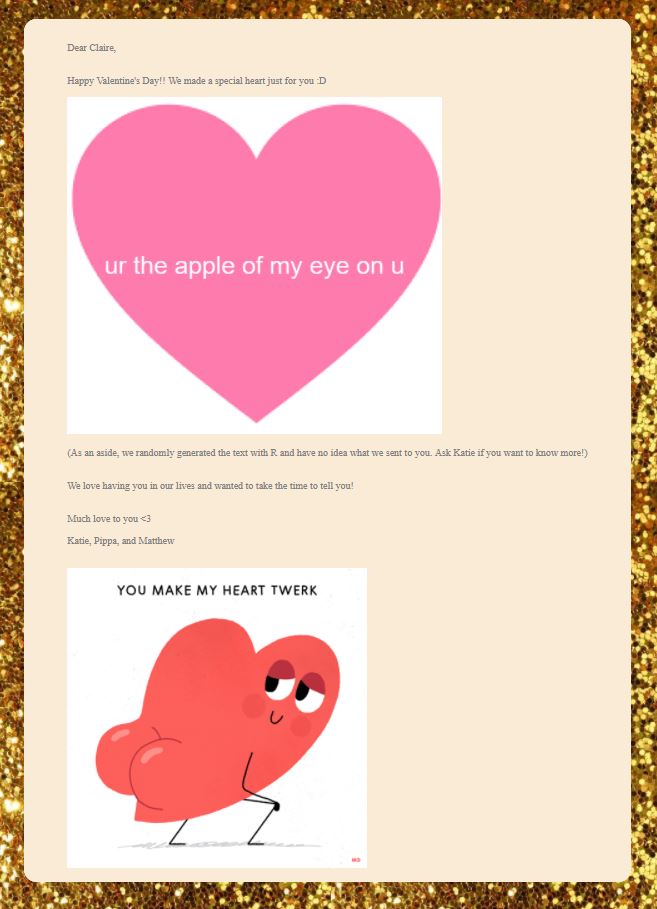 Now my house is in an R mood so we are working on using this general outline to do some projects with the student run food co-op on campus! I love getting my groceries from them, and I’d love to be able to automate some of their emails to make their lives easier. Right now we are just in the idea phase, but I’m having a lot of fun seeing little projects turn into impactful tools for people and causes I care about. I’m hoping to be able to write about that partnership in the near future!